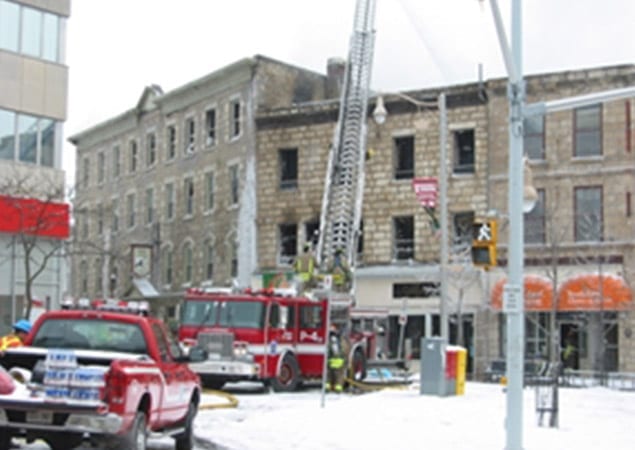 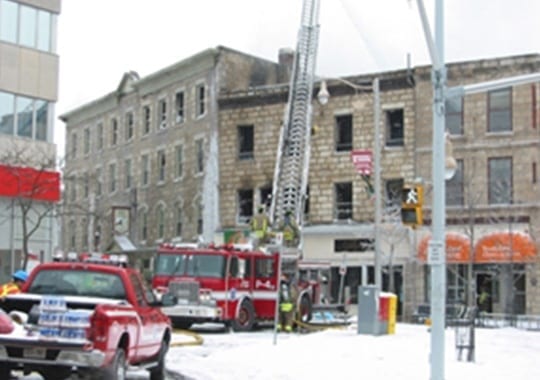 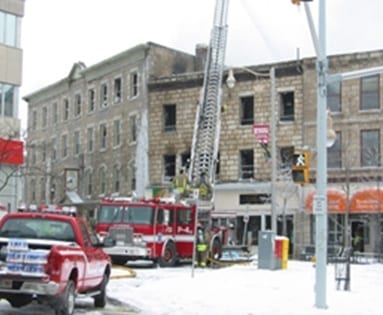 Guelph Mercury: Gummer Wants City to Pitch in For Repair

The owner of the Gummer building plans to ask the city to pitch in $1 million for a joint redevelopment of the Gummer and Victoria buildings at tonight's city council meeting.

The owner of the Gummer building plans to ask the city to pitch in $1 million for a joint redevelopment of the Gummer and Victoria buildings at tonight’s city council meeting.

Both buildings were all but destroyed in an April 6 fire.

Skyline Incorporated has accepted an offer to buy what’s left of the Victoria building from its current owner, but won’t move ahead with the purchase unless the city can help preserve the buildings’ heritage qualities with a financial contribution.

Skyline’s plan is to incorporate both building facades into a finished unit of 64,000 square feet — more than twice the size of the combined building area before the fire. Documents submitted by Skyline to the city say the new building would be of “significantly higher quality” than the original two buildings.

“It seems to me a very innovative, appropriate, adaptive reuse of what could have been a tragic loss,” said Councillor Leanne Piper, the council’s representative on the Heritage Guelph committee.

Piper said the Douglas Street redevelopment would be an economically viable investment for both the city and Skyline.

The city is currently in the process of designating the Victoria building a heritage property.

The 30-day public commenting period has closed, and the city must now pass a bylaw to protect the property under the Ontario Heritage Act.

The city has not yet begun this process for the Gummer building, but Piper said she expects it to begin in the near future.

Piper said the city doesn’t technically have to secure the heritage designations in order to give Skyline the funds, but she said it would be “the most prudent thing to do.”

The designations would protect the facades of the buildings as well as some of the doorways and window openings.

Skyline is also seeking a guarantee of 100 downtown parking spaces before it moves ahead with the project.

Mark Rodford, chair of the Downtown Board of Management, said the proposal might encourage council to move ahead with the parking garage suggested for the Baker Street lot.

“I think it would be great if it could because parking is in huge demand,” he said.

Also up before council tonight is a proposal to establish an ongoing Heritage Redevelopment Reserve to help owners maintain the heritage elements of their properties.